Chronic illness, even certain Cancers linked to Mono / Epstein-Barr Virus PLUS my protocol

If you were ever diagnosed with Mono, you might want to read this. If you suffer from any Chronic Illness and have no idea what causes it, you ought to ask your doctor to test your Epstein Barr Virus titers.

Mononucleosis, or more properly, infectious mononucleosis, is caused by the Epstein-Barr virus, a herpes virus related to the agents that cause cold sores and chicken pox. Most people get mono at some point in their lives, usually during childhood and, usually, the disease is so mild that youngsters don’t even know they’re infected. The virus then stays in the body for life, usually causing no further trouble. It seems that the older you are when you first catch mono, the worse your symptoms can become. Some people, who are run down or whose immune systems are depressed, can get quite sick with mono. (source)

Epstein-Barr Virus (EBV) is the virus that causes mononucleosis, or mono. It’s extremely common–95% of Americans have been exposed to EBV (whether they developed mono or not) by the time they reach 40. Once you’ve been exposed to EBV, it does not leave your body. It becomes latent, but always has the potential of being retriggered if your immune system becomes compromised–for example, during periods of high stress. In most healthy people, EBV never reactivates, but studies have shown that CFS is associated with a reactivation of the virus. (source)

I got sick a lot as a child. Eventually, a sore throat would cause my parents to take me to the doctor. There were periods of my childhood when I remember being sick over and over with Strep, Tonsilitis, and terrible exhausting colds. I had my tonsils removed in my eighth-grade year. Looking back, I think it is possible that I had mono at some point during all those bouts of illness.

There are four stages of EBV

In the first stage, the virus lies dormant, however

…if you physically exhaust yourself for weeks and give yourself no chance to fully recover, or allow your body to become deprived of essential nutrients such as zinc or vitamin B12, or undergo a traumatic emotional experience such as a breakup or the death of a loved one, the virus will detect your stress-related hormones and choose that time to take advantage. (source – Goop)

It is important to read more about the Four Stages of EBV, especially if you have a chronic illness, thyroid disorders, Lupus, Multiple Sclerosis, Chronic Fatigue, Fibromyalgia, Vertigo, Tinnitus, Anxiety, Panic Attacks, or Depression and even certain Cancers. (source for EBV/Cancer Connection, another source for Cancer and EBV link)

If a doctor gives you a Hashimoto’s diagnosis, it really means that she or he doesn’t know what’s wrong. The claim is that your body is attacking your thyroid—a view that arises from misinformation. In truth, it’s the EBV—not your body—attacking the thyroid. (source)

My thyroid had been underactive for years. However, it wasn’t until 2012 after a season of extreme fatigue, that I tested positive for Epstein-Barr Virus. After the first round had been managed, I thought that was the end of it. I was so wrong.  In 2016 I had extreme exhaustion that kept me in bed for days on end with no other symptoms besides fatigue. Doctors ran tests; I tried various fatigue reducing treatments before I finally remembered to ask my doctor about to test me for EBV. I was tested and found positive again.

At that point, I knew that being positive for EBV was something that I was going to need to deal with and be proactive about for the rest of my life. I knew from experience that I couldn’t be passive about it if I wanted to live a fully active lifestyle as I always had before.

Thankfully, I was able to get a really good treatment plan from my doctors at Knox Wellness and follow a protocol which included Monolaurin and Vitamin A Mulsion to really get over the fatigue and get my titers to come down quicker than if I had just rested and drank water (which is what most doctors recommend.)

Some other supplements my doctor suggested (I took some but not all) many of which I already take.

Recently, researchers have been working on formulating a mono-vaccine, I discovered after reading about this case study.

Someone who has tested positive for EBV needs to pay particular attention to their liver.

A healthy liver is fundamental for your well being. Most Epstein Barr patients have liver problems, although sometimes they are not aware of it. However, if the liver doesn’t get back to proper functioning, then all the therapies, supplements and treatments in the world are unlikely to be effective.

The liver of a mononucleosis sufferer is often compromised by the Epstein Barr virus which targets the liver and affects its function. This results in a build up of toxins in the body which can contribute to fatigue, bloating, constipation and diarrhea, devitalized skin, headaches, weight gain and crankiness. (source – Elizabeth Noble)

Drinking water with lemon first thing in the morning is an excellent way to flush the liver. I started paying particular attention to drinking enough water to flush the virus from my body.

Getting outdoors is essential for well-being in everyone, but people diagnosed with EBV especially need to make sure to get some sunlight every day.

Studies show that exposing the body to sunlight or even ultraviolet light from an artificial source increases the number of white blood cells – the body’s primary defence against infections like Epstein Barr. Sunlight has also been shown to improve your mood and regulate your sleep patterns – both which can be problems in Epstein Barr sufferers.

While we all need to be “sun-safe”, many people get nowhere near the amount of sunlight they need for optimal health. It is estimated that 90% of westerners spend more than 90% of their time indoors.  I recommend my patients get a daily dose of 30 minutes of sunlight onto their skin. Early morning or early afternoon sunlight is best if you live in a hot area or at a high altitude. Avoid midday sun.(source – Elizabeth Noble)

It is imperative to maintain a positive attitude

Changing the way you think about your life can also help you adapt to an illness. Developing an improved appreciation of life – stopping to smell the roses can help keep your spirits up and help you cope.

The first time I tested positive for EBV, my doctor treated it with Hydrogen Peroxide IV therapy. Since then we moved, and I no longer see a doctor that offers that treatment. However, I did receive a series of Myers Cocktail IV infusions and a high dose Vitamin C IV infusion at my current doctor’s office.

It is paramount to prioritize stress reduction. Both times my EBV titers were out of the normal range were after a period of stress. There is no way to avoid stress in life, but it is important to recognize when we are under more stress than usual. During those times it’s important to support our adrenals, drink lots of water, get enough rest and take supplements to support the immune system.

Taking a leisurely walk, watching a funny movie, getting a massage, or whatever helps reduce stress – do it!

How I changed my diet because of EBV

For years I have eaten a clean foods diet. I followed a Raw Vegan Diet for a couple of years before adding meat back into my diet. For several years I have followed the Trim Healthy Mama lifestyle. I realized that maintaining a healthy gut was crucial, so once again, I started to cut out dairy and gluten.

Most people need to reduce high carbohydrate foods like sugar, bread, cereals, biscuits, pasta and rice. These foods can trigger inflammation in your body, worsening inflammatory symptoms like a sore throat, muscle aches, fatigue and liver inflammation. High carbohydrate foods can also cause your blood sugar to fluctuate, leaving you tired, grumpy and craving sugar. Sugars are particularly bad as they have been shown to suppress your white blood cell activity. These are the very cells you rely on to hunt down and rid the Epstein Barr virus from your body. (source)

The hardest part for me on a Gluten and Dairy Free diet has been not putting cream in my coffee. Also, many practitioners say that giving up coffee is important as well. (1,2) I have not accomplished this step yet. There are lots of recipes at this link that can help make the transition to eating foods that can help manage EBV.

Unfortunately, once you have EBV, you have it for life.  It’s important to learn how to avoid what I call “flare ups” which is basically when these virus colonies start getting out of control.

Aches, pains, headaches and more not fun stuff seem to be part of EBV/CFS. I noticed a lot of joint pain that progressively got worse. My knees especially gave me trouble. Here are a few things I did…

I found this protocol in a forum on Curezone.org (source for protocol below) I was already doing items 1, 2, 3, 7, and 8.

I just compiled this as a service to others as I felt it is a very practical program that worked well. By the way I had Chrinic Fatigue Syndrome for twenty years, but now 95% cured. I still have some EBV remaining and will use the above program to kill it off.

From what I have read, “curing” EBV is almost impossible, therefore it is considered a chronic illness. I did read an article about Longterm Anti-Viral treatments using Valtrex which if followed for 11 years would ultimately eradicate the virus from the body. Though he stated that reducing EBV activity was more important than total eradication.

I also found this very helpful list of Healing Foods; I would recommend following this link to read more about supplements that are recommended along with other useful information.

Certain fruits and vegetables can help your body rid itself of EBV and heal from its effects. The following are the best ones to incorporate into your diet (listed in rough order of importance). Try to eat at least three of these foods per day—the more the better—rotating your consumption so that in a given week or two, you get all of these foods into your system.

If you suffer from a chronic illness and need a place to go just to vent or get encouragement, join us at Hopelively. 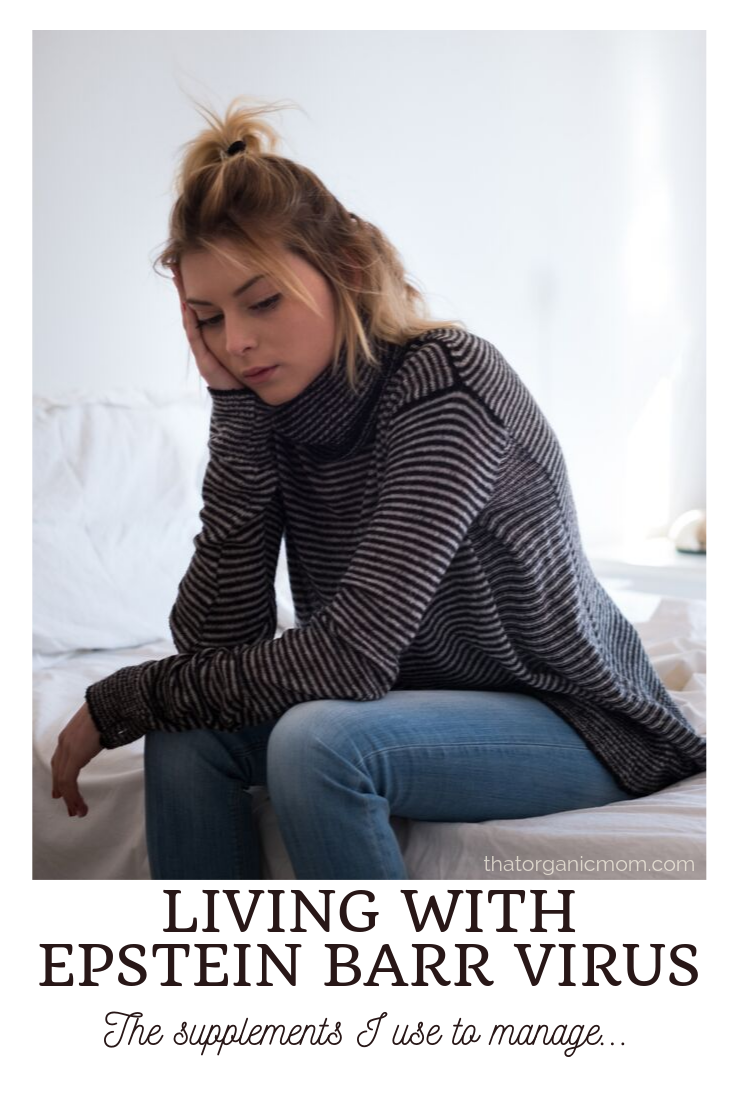 Christmas 2015
Next Post: Easy healthy menus even when you’re too tired to plan!