14 Things We Do to Lower the Risk of Metabolic Syndrome 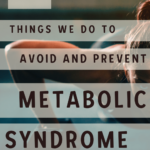 Insulin and Blood Glucose Levels – How it works

The role of insulin is to regulate the metabolism of fat and carbs. Our digestive system breaks down carbohydrates into glucose, which is used by our cells to provide energy. Insulin is the gatekeeper of the cells allowing them to receive glucose, thereby lowering the glucose levels in the bloodstream.

Each time we consume a meal, our blood glucose level increases. The pancreas then releases insulin into our bloodstream, which in turn assists our cells in absorbing the glucose. The insulin stimulates our liver to store extra glucose as glycogen.

When blood sugar drops, a hormone in the pancreas stimulates cells to break down glycogen into glucose and release it into the bloodstream keeping everything balanced.

When we have an imbalance in our insulin and glucose levels, it is called insulin resistance. That means that the cells do not respond appropriately to insulin and have trouble absorbing glucose, so the body produces more insulin to counterbalance the (perceived) lack of glucose.

As time goes by and insulin resistance builds up, the pancreas can't produce enough insulin to keep blood glucose regulated, and levels rise. At this point, pre-diabetes, diabetes, and other metabolic disorders arise. Many people develop pre-diabetes and have no idea until full-blown type II diabetes develops.

Before we started using fat for fuel, we ate a whole foods diet, including all food groups and excluding processed foods. My husband didn't feel good if he went more than a few hours without eating. This made me wonder if he had a blood sugar imbalance; so I began monitoring his glucose levels. I used a monitor that would allow us to test our glucose as well as our ketones.

Around this same time, I had been intermittent fasting from time to time to allow my digestive system a break. Some days I fasted from after dinner one night until dinner the next day, and other days, I did a bone broth fast. I had also been practicing using fat for fuel to see what kind of impact it would have on my body.

After monitoring both of our blood sugar levels for a few weeks, we started working towards pre-diabetes prevention.

Conventional dietary guidelines for diabetics are not producing outstanding results. In fact, I'd say they could be considered a failure. Many people with diabetes are told to eat fruit, grains, and other starchy carbs that turn to sugar and cause an insulin reaction.

We chose to cut out the “healthy grains” for a while and focus on high-quality fats.

What we did to cut our risk of metabolic syndrome

Quit Sugar to drastically reduce the risk of metabolic syndrome

For the first time in a long time, I didn't crave anything.

Recently, I received a box of Pyure products that are perfect for preparing desserts without sugar overload! Stevia is widely used as a sweetener around the world and has no effect on either blood sugar levels or glucose response. This makes it an excellent choice for those wanting to avoid metabolic syndrome as well as Type 2 Diabetes.

Opt-in here to get new posts (including new upcoming recipes we have created with Pyure) delivered to your inbox.

I recently read the following on Dr. Hyman's website:

“Insulin resistance affects many people and is not exactly the same in everyone, but the ultimate consequences can be similar.

The only sure way to know is with an insulin response test (measuring blood sugar and insulin fasting and one and two hours after a 75-gram sugar drink).

We once thought that insulin's only role was to help sugar enter the cells to be metabolized, combining stored energy with oxygen and creating the energy we use every day to run our bodies. Now we recognize insulin as a major switching station, or control hormone, for many processes. It is a major storage hormone – fat storage that is.

Balancing blood sugar and correcting insulin resistance is well within our reach. Scientific advances of the last few decades point the way to managing this. All we have to do is focus on eating whole, real food, avoid sugary processed foods as much as possible, eat healthy fats, and stay away from hydrogenated oils.” Source: Dr. Hyman I Just Can't Seem to Get this Weight Off My Waist. Why Not?