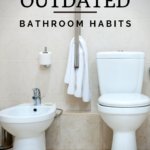 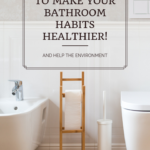 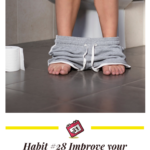 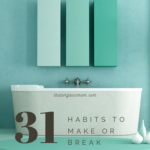 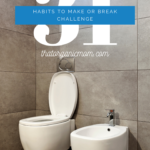 If you improve your bathroom routine you can count on better health. Before you get grossed out and dismiss this concept, give me a chance to make three points. I think I can convince you that this habit can make a difference in your overall health.

Overall, as a society, Americans are very reluctant to discuss bathroom issues and even more reluctant to change hygiene habits even though some of their current habits are outdated!

We’ve already started working on a couple of habits that will improve your elimination. Habits such as walking, drinking water, prebiotics and probiotics, enough fiber from veggies, getting more magnesium and even relaxing will all help you have more successful and regular bowel habits.

I understand talking about your bathroom habits can be, well, a little bit uncomfortable. I don’t want to make you feel awkward or embarrassed but this is a habit you need to get right!

Ergonomics of the modern toilet

First of all, I want to point out that the modern day toilet has only been around for a few hundred years before the toilet people used an outhouse in which the earliest versions only included a hole in the ground over which people would squat to achieve elimination. “The earliest record of a water closet system was in China. A stone toilet bowl with a water system was found to have been used in 206 B.C.”

Sitting to poop does restrict the flow from your colon. Squatting, as most people in China do, is a more effective way to perform elimination. While visiting China I noticed that in places where both squat and sit toilets were provided, most people used the squat toilets.

Stool for your stool

Back when I first started studying about ways to achieve better health, someone suggested using a “stool for your stool” and that tip has stuck with our family. At first, we used a stool that was already in our bathrooms for the children to reach the sink which worked pretty good but really wasn't quite high enough or wide enough to fit properly at the toilet. Then later we bought a stool that was specifically made for use at the toilet, it is pictured below. 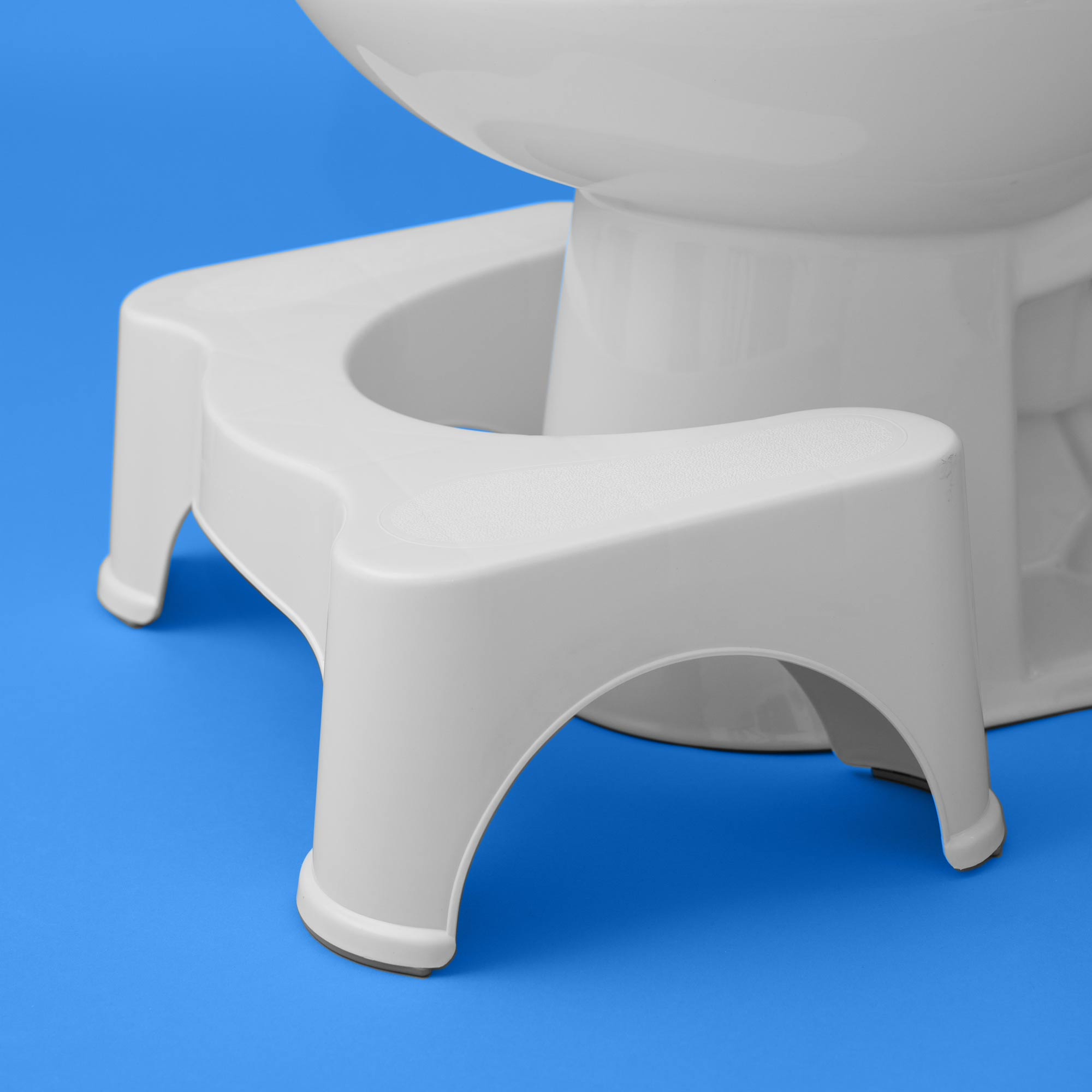 Squatting may help prevent hemorrhoids or prevent the worsening of hemorrhoids. The squat posture is also better for pregnant women as squatting avoids putting pressure on the uterus. One study suggests that the greater the hip flexion achieved by squatting the straighter the rectoanal canal will be, and accordingly, less strain will be required for defecation. (source)

The second point is concerning hygiene, specifically the use of a bidet. I read an analogy about using a bidet recently. Imagine you checked into a nice hotel but when you got ready to take a shower you realized there was no water. When you asked the hotel staff, they gave you a bunch of toilet paper to clean your body with. Of course, you would never think of cleaning your entire body with just dry toilet paper. So, why would you clean your behind that way?

Using a bidet is much more hygienic than using dry toilet paper. Let me tell you something about those adult wet wipes; they should not be flushed. I understand the package says they are flushable. Yes, a wipe can be flushed, but what you don’t see is the problems they cause down the line, literally and figuratively. I won’t use word space on it, but if you don’t believe it’s a problem, go here, here and here or just Google it and check out the almost 300,000 results.

Bidet's are not as uncommon as you think

While traveling through Japan, one thing we noticed was that the bathrooms, even in the airport had the option to rinse your booty! When it comes to bathrooms, we could take some pointers from the Japanese! The toilets there actually have everything you need to wash your booty! I read one estimate that over 70% of Japanese households currently had a bidet. After you begin using a bidet, you will find dry toilet paper almost primitive!

Listen to A Healthy Bite episode “potty mouth” where my daughter and I talk about using a bidet. We recorded it during her senior year of high school – her last year at home. There were a few chuckles…

Various types of bidets are available

My first bidet was already installed in a house that I bought in Florida about 13 years ago. It was situated right next to the toilet in the master bathroom. It had temperature controls, which is better than straight cold water. The bidet I use now comes from Squatty Potty and right now they have free shipping inside the US and it looks like the one below: 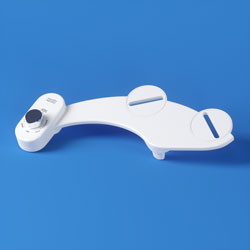 I have not come across another house for sale that had a built in bidet since that one and I’ve never seen another one in anyone's home either. In my current home, there is not enough room to install a full-size bidet, but we installed bidets on our current toilets. The water is not warm but it’s effective. If I ever build a house or buy one with enough room, I will have a proper bidet installed again!

Once you start using a bidet you will not want to go back to dry toilet paper again. I would also like to mention that using a bidet saves paper AND water. Yes, manufacturing toilet paper uses a ton of resources like trees, water, and energy. Read more here.

The third point is short but sweet. If you leave an unpleasant odor when you use the bathroom, please do not spray the air with toxic air fresheners. Not only does the fragrance pollute the air but it contains phthalates, formaldehyde, VOCs, carcinogens.

Not only does the fragrance affect you in the long term, some people are highly allergic to fragrances and they can also trigger asthma attacks. We talked about this in a previous habit. If you'd like to see a list of all 31 habits click this link.

You don’t have to be embarrassed and there’s no need to buy a fancy poo-pourri, just keep a bottle of essential oils in your bathroom. Simply add one or two drops in the toilet and no one will ever know what you did.

If you have no idea How to use a bidet just click the link. My first post about pooping more efficiently can be found here or by clicking on the picture below. Don't forget to pin this post! 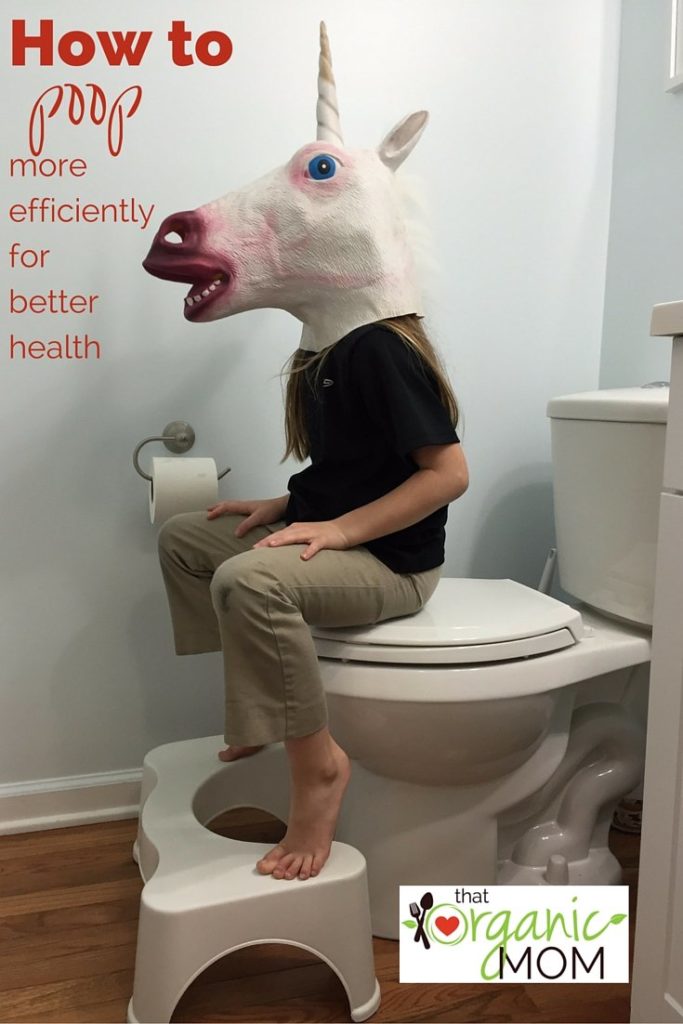 I hope that you will consider my three points. They will help you create some new bathroom routines and achieve better elimination. 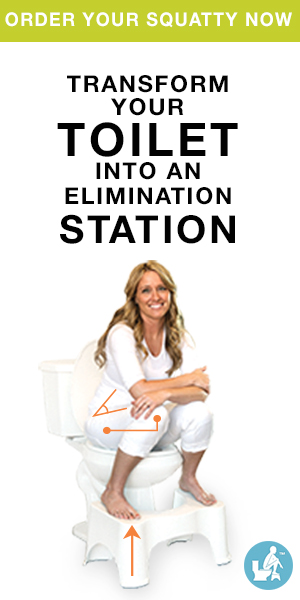 Freezer Meals for the Busy Mama PLUS menu plan
Next Post: Habit #29 Start a bucket list and learn something new