My son loves fresh bagels and trips to the local bagel shop. In my Pumpkin Spice Bagel recipe post, I shared my motivation for learning to make bagels at home. Even though I don’t eat too many bagels myself (carb load!) I enjoy making them for my kids.

Everything bagels are one of the tastiest flavors in the variety that we’ve found available. They also happen to be Harmon’s favorite flavor. He is the motivation for these bagel posts. If it weren't for my kids it would be so much easier to avoid carbohydrates!

I know so many people prefer to skip reading and go straight to the recipe so if that’s you, feel free to move ahead, but I’d like to explain why I am sharing these recipes.

My kids and well, other members of my extended family, come to my website to grab recipes of foods that I’ve made. They also understand my way of explaining how to make things in the kitchen.

When I was a child, there were certain foods that my mom made that I enjoyed and wanted to make when I became an adult. I’ve repeatedly asked my mom for those recipes, and eventually, I asked her if I could put one of them on my website. For example Mom's Kraut Burgers.

Other recipes, I’ve been making for my family for decades, and now that they are grown and on their own, they want to make them in their own kitchens: such as the Healthiest Bar Ever Recipe for the Family.

So that is why I have these recipes on my website. So my family can find them and make them no matter how far away they are.

Notes about everything bagels

It’s really not that hard to make bagels. Actually, the process is quite enjoyable. I wouldn’t whip up a batch of these on a weekday morning before work or school. They’re easy enough to make over the weekend though when you can do something else while the dough rises.

Don’t be afraid to try these, is all that I’m saying. If you have a bread machine, you can even make the dough on the dough setting. After it rises, turn it out on the floured surface and knead more flour into it because you don’t want the dough to be too puffy or soft. A bread machine or stand mixer will do fine for the most part but to make your bagels chewy, you'll need to add in more flour by kneading.

Bagels are dense and they need to be able to hold up in the water bath. So go ahead and knead in a bit more flour during that process, but not too much! Balance is key.

As for the everything seasoning mix

What is everything bagel seasoning? Usually, it's a blend of poppy seeds, sesame seeds, garlic flakes, and sea salt.

Costco has everything bagel seasoning in bulk, and if you’re a huge fan like we are, that might be the way to go.

However, if you don’t have a membership or don’t need that much seasoning, go for Trader Joe’s smaller bottle of everything but the bagel seasoning. I’ve used both and the taste is very similar, though Costco's blend might be a touch saltier.

If you don’t live near Costco or TJ’s you may need to buy the blend online (it’s way more expensive on Amazon than in the store!)

We use an entire Trader Joe's sized bottle on our bagels as we sprinkle the tops and bottoms of all eight of them. If that’s too “everything” for you, just sprinkle on as much as you think you’ll like.

Alternatively, you can mix your own using 2 tablespoons of everything except for the salt. Depending on what type of salt you use and how salty you like things try 1 to 1 and 1/2 tablespoons :

I use my Kitchen Aid mixer and the large bowl with the hook attachment to knead the dough and it works beautifully. You can experiment with different amounts of wheat flour added to all-purpose flour. Just remember that whole wheat flour is denser than plain white flour. It results in a heavier end product as well, so you'll want to use less overall.

Bagel dough is denser than other breads such as loaf bread or cinnamon rolls, so keep that in mind when you are adding in the extra flour.

My kids love the combination of cream cheese and chives, so that is what we typically mix for topping these. You can let your imagination guide you. I still prefer to toast the bagels before serving, to get that crispy crunch on the top and bottom of a golden brown bagel.

Try a thin smear of cream cheese with veggies on top such as sliced bell pepper and thinly sliced tomato. Sliced avocado also pairs well, as does smoked salmon or bacon.

One note about cream cheese: if you can get locally sourced cream cheese you will be thrilled with the combo. However, if you can't, whipped cream cheese works best. The typical rectangle of cream cheese straight from your fridge will be too hard to spread on a hot bagel. It will stick to your knife and slide right off the hot bagel! I like to let mine sit out for a while before trying to spread it on the bagels.

Hot, fresh bagels straight from the oven are absolutely delicious when toasted and slathered with cream cheese, then sprinkled with chives. If you want you could sprinkle a little more everything bagel seasoning on top.

Prep time for bagels is about 15 minutes, but remember you need to let them rise, then shape, boil, and bake, so the total time is between 2-3 hours. Just keep in mind that you aren't actively working the entire time. The first time you make them may take a bit longer, but after that you'll see how it works and move through the steps quickly. 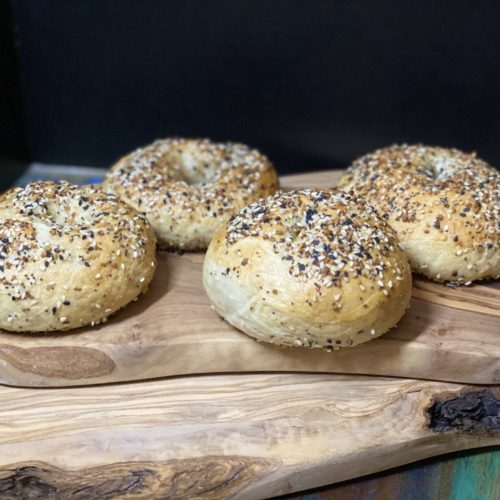 You can substitute water and 3 tablespoons of sweetener if you don’t have pineapple juice.  A note about yeast: active dry yeast should be dissolved in water first before adding to the flour mixture. Instant yeast can be mixed right into your dry ingredients. Using bread machine yeast means you have to give the dough two rises before baking. If that’s all you have, you can let the second rise be after the burgers are wrapped.