For many of us, fall is a time for pumpkin spice! Recently my son asked that I make homemade bagels and teach him how. His favorite is everything bagels and we often drive across town to Old City to grab a couple to eat in the park while we talk about politics. Well, he talks, I listen.

He has lots of opinions about things and is a sponge when it comes to new information. Advanced taste in good food is another thing he has and there is no better example than the humble bagel.

Once he got a penchant for freshly baked bagels, he became a bagel snob. Store-bought (read: old, stale, inferior) bagels would sit and mold in the pantry if I brought them home from the grocery store. He couldn’t bring himself to eat them anymore.

One weekend, after driving over twenty minutes one way downtown to enjoy a fresh bagel together he came to a realization. Satisfying his taste for bagels was not a cost nor time, efficient activity.

This sometimes once a week habit was something that cut into his already packed day. He’s all about efficiency. (Can’t imagine where he gets that trait 😉 ahem…) Not to mention the cost was around $20 for three bagels with cream cheese. Three, because even though this was our time alone together, we always brought home a bagel for his sister.

Thinking about the forty-ish minutes of driving along with the twenty bucks, he suggested that we learn to make bagels at home to satisfy his carbohydrates cravings and save money, gas, and time away from home.

I found my favorite yeasted dough recipe, which I use in my mom’s Kraut Burger recipe, and I made some adjustments. Tested, re-tested, and realized it’s not that hard to make bagels. Perhaps the little shop we typically visit uses a chef-approved bagel recipe, perhaps one they traveled to Germany or Austria to discover.

I'm here to tell you that you don't need to be a chef or a baker to enjoy your own homemade bagels. All you need is a recipe that works and a few ingredients.

I started out by making Harmon's Everything Bagels which are top-notch and so savory! But because it’s fall and I had the pumpkin pie spice blend in my cabinet, I decided to create some pumpkin spice bagels. They turned out beautifully.

I’ll admit that I’m not a PSL (pumpkin spice latte) fan, as I don’t actually like to drink sugar in my coffee (or any other beverage for that matter!) But I do like the blend of cinnamon, nutmeg, ginger, cloves, and allspice that makes Pumpkin Pie Spice what it is. Sometimes I will even sprinkle it on top of my “unsugared” coffee or chai tea.

It doesn’t matter if you are a pumpkin spice-aholic or you never touch the stuff, these bagels are amazing and you need to get some on your table right now!

So what I’m saying is, you CAN make homemade bagels. It’s not that hard. The hardest part is sticking to one serving size! They don’t have to be perfect. It’s okay to mess up and try again. After all, flour is not expensive.

With these oh-so-fine homemade pumpkin spice bagels baking in your kitchen, you won't need to light a scented candle! Your entire home will smell like happiness!

As for topping these bagels, I recommend the following: 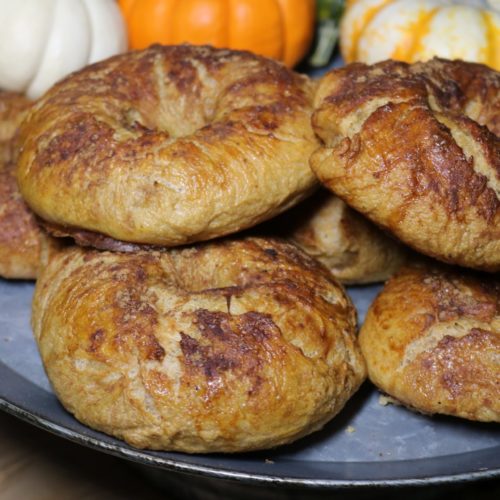 Rebecca Huff
With these oh-so-fine homemade pumpkin spice bagels baking in your kitchen, you won't need to light a scented candle! Your entire home will smell like happiness!
No ratings yet
Print Recipe Pin Recipe Add to Collection Go to Collections
Servings 8 bagels

If you want to make these and don’t have pineapple juice, just substitute water and increase the coconut sugar to 1/3 cup. A note about yeast. Active dry yeast should be dissolved in water first before adding to the flour mixture. Instant yeast can be mixed right into your dry ingredients. Using bread machine yeast means you have to give the dough two rises before baking.
Tried this recipe?Let us know how it was!

Grab your kids and get in the kitchen and learn to make bagels. When they come out of the oven, try to wait a minute, even though it's hard, for them to cool off a bit.

Then, slice them open and smear on some cream cheese! Top with pumpkin butter if you like. Either way, they taste absolutely amazing.

How to Help Your Kids Stop Eating So Much Sugar
Next Post: Harmon’s Homemade Everything Bagel Recipe