Could your lightbulb be toxic? What you don’t know might hurt you.

Home » Blog » Could your lightbulb be toxic? What you don’t know might hurt you. 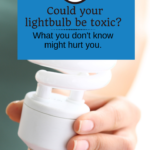 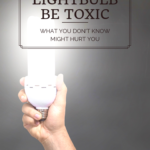 The new lighting standards went into effect over a decade ago, in 2007. More recently, the reach of the law was expanded to include incandescent reflector bulbs, candle shape bulbs, and certain other specialty bulbs.

Again in 2019, a proposal to withdraw the previous regulation was issued.  The New York Times called it America’s Light Bulb Revolution.

The world discards approximately 670 million fluorescent bulbs yearly according to estimates. This in spite of recycling programs, releasing 4 tons of mercury each year into our environment.

Why all the debate about bulbs?

So what’s the deal with light bulb options? Why so much controversy about something that has been around since the late 1800s? Are the newer bulbs better for the environment or are they a threat to our health?

Incandescent bulbs are the basic style of bulb invented by Thomas Edison. A tungsten wire filament is wrapped in a tight coil through which electricity passes, heating to a very high temperature.

Because of this heat, which is mostly lost energy, incandescent bulbs are considered less efficient than other types of bulbs.

Incandescent bulbs emit a broad spectrum of light which has a positive impact on our circadian rhythms somewhat like sunlight.

Incandescents last about a year. To recycle an incandescent light bulb, drop it off at your local recycling center. If broken, traditional incandescent bulbs can go in with regular household trash.

A slight improvement on the incandescent is the halogen bulb. A halogen is an incandescent lamp that consists of a tungsten filament sealed into a compact transparent envelope. This filament section is filled with a mixture of an inert gas and a small amount of a halogen such as iodine or bromine.

Halogen bulbs use about 30% less energy and last around three times as long as the traditional incandescent.

When halogen bulbs break they can be tossed in regular household waste. These bulbs could be safely recycled, although many are not recyclable due to the fine wires. When in doubt, ask your local recycling center.

The curled compact fluorescent bulb which was designed to use up to 75% less energy than incandescent bulbs, is said to last for many years. Some manufacturers claim their CFLs last up to ten years. These CFL bulbs are slow to brighten, and the light quality isn’t as warm as an incandescent.

CFLs have a bit of a bad reputation. According to some studies fluorescent light has generates free radicals within cells.

Governments around the world are banning energy inefficient light bulbs in an attempt to reduce consumption of fossil fuels and the emission of greenhouse gases. However, the energy efficient light bulbs that are currently available may be harming both the environment (mercury content of bulbs is high) and human health (electromagnetic pollution)

Instead of promoting compact fluorescent light bulbs, governments should be insisting that manufacturers produce light bulbs that do not produce radio frequency or UV radiation and that are safe for the environment and for human health

While the light bulbs are supposed to be cost-saving, what many people do not realize is that the rating is based on continually being on. Turning compact fluorescent bulbs on and off actually reduces their lifespan down to that of a regular bulb.

Leaving the light on to increase the lifespan of the light can be inconvenient in places like bathrooms and closets.

Much of the advertising copy we have been sold on CFLs contains exaggerated and misleading claims. The fine print is that the average lifetime is not 10,000 hours, but “up to” 10,000 hours.

In many applications, the lifetime of a CFL and estimated energy savings are significantly lower than we have been led to believe. For a compact fluorescent bulb to achieve the claimed efficiency, it has to be burned continuously for long periods.

If a CFL is left on for only 5-minute periods, it will burn out just as fast as an incandescent bulb. To avoid short cycling, the U.S. Energy Star program advises consumers to leave compact fluorescents on for at least 15 minutes. 1

CFLs produce ultraviolet light and heat from an electric current that flows between electrodes located at each of a tube that contains gas. CFLs are a little more complicated than incandescent bulbs in that the brightness is measured in lumens.

CFLs differ from incandescents which are measured by watts. A typical 40-watt bulb would be the equivalent to 450 lumens in a CFL. This number is typically printed on the base of the bulb or the bulb itself. 1a

One of the obstacles with energy-saving light bulbs is that many consumers do not know how to dispose of them properly.

Fluorescent bulbs should always be stored in the original packaging to avoid accidental breakage and subsequent contamination.

Compact fluorescent lamps should never be included with the regular household trash. CFLs contain small amounts of mercury and should be collected separately for disposal. When they end up in a landfill or incinerator mercury is released into the environment. Each CFL bulb contains about 4 milligrams of mercury. 2

Recycling CFLs means that the glass and metal can be reused as practically the entire bulb is recyclable. Some states, such as Florida, may require recycling of CFLs and other bulbs containing mercury. These states may also provide CFL disposal options for users. 2a

In some states it is illegal to crush CFLs. (CFLs are considered hazardous waste but so are moth balls and drain cleaner)

If you use CFLs please recycle them

Use this link to find out where to dispose of CFLs in your area.

For example, there are at least 50 locations in the area where I live that collect CFLs for proper disposal. Search Earth911 to find a place for CFL collection close to where you live.

What to do if a CFL breaks

Go to this link for detailed instructions on cleaning up a CFL.  There is a printable version of the cleaning instructions; if you are going to use CFLs it might be a good idea to keep it handy.

Again, mercury is released when you break a CFL bulb.

CFLs that smoke or smolder

Some people have reported smoldering or smoke coming from CFLs although these bulbs are required to meet design standards that are self-extinguishing. CFLs with he energy star rating are required to offer at a minimum, a 2-year warranty for home use.

Most manufacturers will require the defective product to be shipped back before they will provide a replacement for smoking bulbs.

Light-emitting diodes are small light sources that use the movement of electrons through a semiconductor material to produce light. LEDs are frequently used to draw attention to things such as power button lights or exit signs.

LED is 90% more efficient than incandescent bulbs according to the energystar.gov website. LEDs contain a microchip which an electrical current passes through to illuminate small light sources.

LEDs are directional lighting, unlike CFL, which emits light and heat in every direction. LEDs can use energy and light more efficiently, although they are more complicated to produce.

LED may earn the energy star rating if they meet specific requirements such as light output, color quality, and durability.

What are the risks with LED lighting

LED use after the sun goes down reduces the capacity of your eyes to restore and regenerate. These LED lights emit primarily blue wavelengths and lack the healing and regenerative near-infrared frequency red wavelength, which is necessary for this restoration and regeneration.

LED lights could be preventing you from getting the quality sleep you need for good health. Blue light in the evening reduces melatonin production in the pineal gland AND retina regeneration. 4

Energy-saving light bulbs often have a flickering that can cause migraines and headaches.

Light flicker refers to quick, repeated changes in light intensity – light that appears to flutter and be unsteady. It is caused when the voltage supplied to a light source changes or when the power line voltage itself fluctuates. 4a

You can get a flicker detector or you can try to use the slow-motion mode on your iphone camera although it isn’t entirely accurate.

If you are using LED it’s essential to balance it with natural light from windows if at all possible. Open the curtains or blinds to let the light shine in!

The Top 3 Dangers of LEDs is a good article for those who are looking to find out more about the problems with LED lights.

There are concerns about the safety of the new generation of so-called ‘environmentally friendly’ lighting. She said that prolonged, continuous exposure to this light may be enough to damage a person’s retina. The retina is composed of light-sensitive tissue that is responsible for detecting light and in turn allowing us to see.

This problem is going to get worse, because humans are living longer and children are using electronic devices from a young age, particularly for schoolwork

Warm LEDs appear to have red but actually, are just masking the blue light with more significant amounts of yellow and orange.

The temperature of light in degrees – physical color correlated color temperature -measuring how the light source appears visually – it may look the same as natural light but lacks the quality.

The bottom line is that LED light produced from an LED bulb is not the same as natural light that comes from the sun or from incandescent light bulbs. Unlike LED light, natural light emits all kinds of wavelengths in a continuous manner.

Discard LEDs in regular household waste. While fluorescent tubes need to be recycled; they contain small amounts of mercury, so they must be separated from trash.

Overall, my recommendation is that for those who are concerned about the possibility of health risks, the best choice would be a crystal clear incandescent light or even beeswax candles or salt lamps.

Another plausible option would be to use blue light blocking glasses after sunset.

According to EMF Academy,

The safest type of light bulbs for overall health are simple incandescent bulbs. Although they are less efficient than their counterparts the LED and CFL light bulbs, they emit far less blue light and produce less dirty electricity. 5

Nothing beats sunlight, so if possible harness this free resource for your home. Many houses have skylights that allow light to be reflected inside of a tube that illuminate the room.

My daughter has these skylights in her home in Florida, and they are just as good as turning on a light bulb.

Stay healthy and remember, it’s not just about the lettuce!