Home » Blog » Rachel Ray cooks with EVOO, should you?
Facebook0Tweet0Pin0

Rachel Ray cooks with EVOO, should you?

EVOO- the acronym made famous by chef and TV personality Rachel Ray.

Is Extra Virgin Olive Oil everything she says it is? Should you be eating it?

My Mimi and I were having a chat this past week about food. We love to talk about food in this family! The conversation turned to olive oil. So, today I want to share with my readers what I shared with my Mimi. I have only ever watched Rachel Ray at my Mimi and Uncle Ronnie's house and have many fond memories of spending time with them. Since we don't have cable or satellite tv I do not have a chance to watch her shows at home. I have browsed her cookbooks at the book store a few times, but I do not own any. I enjoy her 30 minute meals, but there is one thing that I wish she would catch up on and stop spreading unhealthy information about.

EVOO. Extra Virgin Olive Oil. Olives are a fruit that grow on a tree and are considered a very healthy part of a Mediterranean diet. Refined olive oil is simply olive oil that has had it's certain components removed. However, those refined oils are unfortunately missing the important antioxidants and anti-inflammatories that make extra-virgin oil so incredibly healthy. Olive oil is rich in monounsaturated fatty acids (MUFAs), which are found in both plant and animal sources, such as olives and olive oil, nuts and seeds, and avocado. According to research, those whose diets were higher in monounsaturated fats (compared to polyunsaturated fats) showed less frequent incidence of breast cancer. Some of the positive actions of this type of fat include:

So let's cook everything with EVOO, right? Wrong.

While EVOO is ideal as a salad dressing it should not be used for cooking, as it can be easily damaged by heat. Polyunsaturated fats, (which include common vegetable oils such as corn, soy, safflower, sunflower, and olive oil) should not be used in cooking. Although mainstream media and TV Chefs like Rachel Ray portray olive oil or EVOO as the healthiest oil, unfortunately this title does not extend to cooking! So, no matter what Rachel Ray says, don't reach for the olive oil when cooking.

You see, because olive oil is primarily a monounsaturated fat, (simply stated: it has one double bond in its fatty acid structure). Think of oxidation in your body like rust on your car. Oxidation can create “free radicals,” which can often cause damage that can raise our risk for heart attack, stroke, cancer and other problems. Ironic isn't it? EVOO is heart healthy yet the very act of heating it too much can cause heart disease.  Now don't get me wrong, please understand EVOO can be healthy, but only when consumed properly. So, how do you use it in a way that promotes health instead of destroying your health?

While olive oil is a smart fat to include in your diet in a non-heated form like in a salad dressing, when it is heated to over 200 to 250F it runs the risk of creating oxidized oil that can do more harm than good in your body.

If you’re cooking over high heat, do not choose olive oil. Olive oil has a lower smoke point—the point at which an oil literally begins to smoke (olive oil’s is between 365° and 420°F)—than some other oils. When you heat olive oil to its smoke point, the beneficial compounds in oil start to degrade, and potentially health-harming compounds form.(1)

It's not as easy as just grabbing some canola or vegetable oil, either. Most of the canola oil in the United States is made from genetically-modified canola seeds so let us skip the canola oil.  The majority of vegetable oils available in the US are made from genetically engineered crops, and they're heavily processed on top of that. So not only are the polyunsaturated fats being oxidized, but these oils also contain other toxins, such as glyphosate and Bt toxin found in genetically engineered corn and soy. Glyphosate is the active ingredient in the broad-spectrum herbicide Roundup, which is used in very large amounts on all of these crops. So there are a number of reasons for avoiding vegetable oils, but the fact that they're oxidized is clearly a high-priority one.

Another important factor in choosing the right oil for cooking is that most vegetable oils are high in omega-6 fats and it is the ratio of omega-3 to omega-6 fats that plays a powerful role in determining many illnesses. So if you are consuming large amounts of vegetable oils you will seriously distort this vital ratio and increase your risk of many degenerative diseases.

What should you be cooking with?

If you are preparing a dish with an Asian flair try using toasted Sesame oil. Sautéing vegetables for a stir fry, why not try coconut oil?

What's wrong with butter? Absolutely nothing! Believe it or not, butter is better for your brain! According to Sally Fallon, author of Nourishing Traditions, butter provides the brain with the nutrients it needs. Nutrients such as:

Butter substitutes like margarine and spreads do not supply these critical nutrients (although many brands have vitamins A and D added); in addition, these industrial products contain rancid oils that can really damage your brain and interfere with learning ability in growing children. (6)

How to select and purchase olive oil:

What other oils can I cook with?

Ghee is another wonderful cooking fat. Infused with the rich flavor of butter minus the milk solids. Ghee is very versatile and can be used in high temperature cooking. It has been used as a traditional Indian cooking fat for thousands of years. Excellent for baking.

Coconut oil is a highly stable saturated fat known for it's antioxidant, antimicrobial, antibacterial and anti fungal properties. In addition, coconut oil can help with insulin control as well as protect against liver damage. There are so many ways to use coconut oil besides cooking, but I especially like it for baking.

Avocado oil has a very high smoke point and a mild taste. I have used it in cooking as well as making homemade mayonnaise, however, I prefer using grape-seed oil when making homemade mayo as the health benefits are wonderful in this often little known about oil.

Red Palm oil is also a healthy oil, I use it in stir-fry dishes… so yummy! Totally safe to heat and eat.

Now, I know my relatives love watching some good ole' Rachel Ray, and that's fine.  She undoubtedly has some great cooking skills and is a very creative chef, but please don't follow her example by cooking with olive oil!

Please help me spread the word, pin this post! 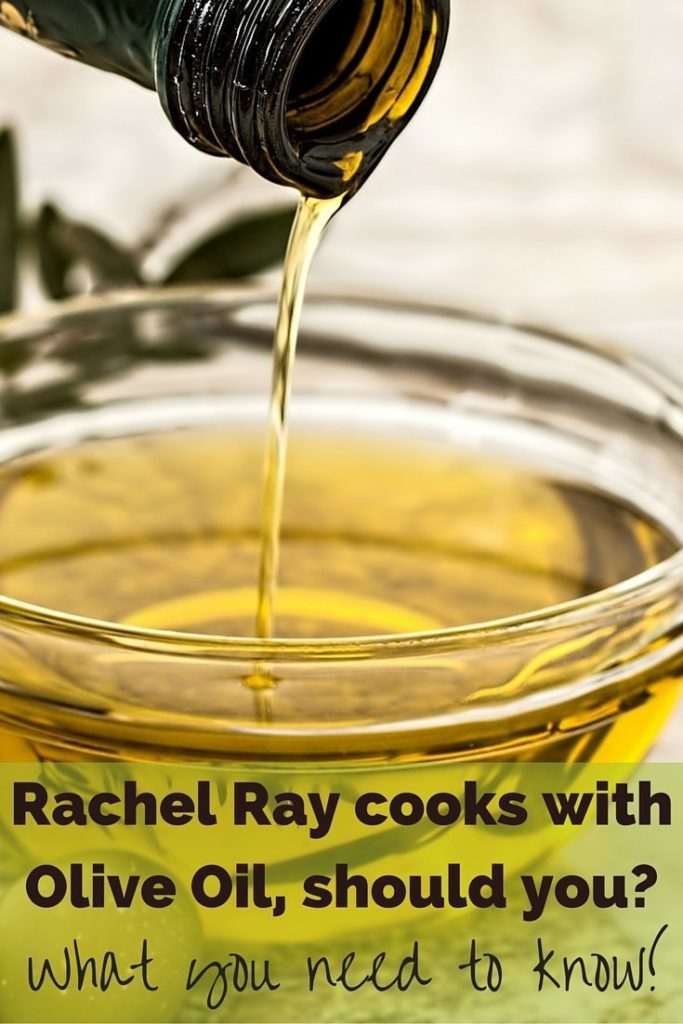 How to stick to your goals AND Hopelively Step Challenge
Next Post: Branded for life – Part one