Home » Blog » How I Potty Trained my Newborn

are methods of cueing in to your infants natural rhythms and signals to essentially teach them to use a potty from the start.

Although EC moms say this is not really considered potty training, I am calling it that because that is what we called it during our time doing it. So for the sake of this post, I will use EC (elimination communication) and “early potty training” interchangeably.

I had read about people doing this, but didn’t believe that it could really be done. I spent a lot time researching and contemplating the subject while I was pregnant. After much discussion and a few doubts, I decided along with my husband that we would do this with our baby as soon as he was born. My 5th child, a boy, was my guinea pig for this learning experience. I started early potty training with him when he was born but really took off when he was around 3 weeks old.

I spent the first 3 weeks after he was born with him wearing a cloth diaper.  We would be holding him almost constantly, and occasionally I would have a thick towel or lap pad, but it was never really needed. When I would feel his diaper get warm from him peeing I would make the sound “sssssssssss” and then I would change his diaper immediately, so it was nice and dry.

At times when he would go #2 I would say the word poopoo…  and I would praise him in a super mommy sweet voice…”good boy Harmon, you are so smart, mommy is proud of you,” etc. (When I say we would hold him constantly, I mean, unless he was asleep or playing on the floor with siblings, we were wearing him in a wrap or carrier.)

After 3 weeks I could tell from his body language when he needed to do #1 and I knew about when he would be needing to do #2…common sense and your own experience tells you, as soon as they wake up from a nap they need to go, in the early weeks during nursing sessions they need to go, and gradually they need to go right after they nurse.  Then again about 15 minutes later.

An infant sleeps a lot and they often go in their sleep, but as he got older he would be dry when I got him up. During his naps I used a diaper on him in the beginning, but as we learned more, it wasn’t always necessary.

When he needed to go I would just hold him in the cradle hold over a bowl in the beginning; later, I would sit him on a tiny potty chair while I sat behind him and wrapped my arm around the front of his waist. By the time he was about 6 months old we had this routine down to a science! He would do #2 every morning and night. So I can honestly say that he did not have more than about half a dozen dirty diapers since then.

Usually the “misses” were my fault…not paying attention to the signals when I was visiting friends, busy doing something else, etc. However, I also had help from my husband and my older children who also enjoyed spending time with their new baby brother! At this time he wore some tiny little undies that my daughter sewed for him.

I think we also purchased some from a website but I can no longer find the link to it. The undies he used when he was little were so small, they looked like doll undies! I am trying to find a picture of him wearing them as they had a print with little veggies all over them in beautiful earth tones (unfortunately the computer I had back then crashed and all the pics are on a “recovery” thing-y which I can’t figure out how to use.)

By the time he turned one year old, he wore his big boy underwear all day including during naps and trips to town.  We did take his little potty with us when we were going places, until I started using the “big potty” with him. Also, I kept everything I might need in my diaper bag just like other moms do who choose to wait until after the age of two.

Early on he also started making the ASL sign for “toilet” which I say “potty” and this let us know when he wanted to go. Really, babies are so much smarter than we give them credit for! I had several potties for him in different places in the house. My favorite was this one:

I never would have believed myself that this was possible, but now I know it can be done. Some of the things I heard along the way were: “you are the one who is trained not him” to which I answer “so what?”  Yes, I was trained. I was trained to take my baby to the potty chair, I had also been trained with my first four babies to wipe stinky poop off my children’s bottoms until they were at least two years old! I am thankful that I am trained to take my son to the potty!

My other son wore diapers until he was almost 3 years old, whew!  Another thing I heard is that I must “make/force him to sit on the potty” and to that I answered,” No I do not” … I have never made him sit on the potty…we started early enough that he understood that this was part of life…it was never a struggle, he was used to it from the start.

How many moms of toddlers (including myself) had to make a two year old sit on the potty? My son was happy to go to the potty… let me tell you, when he gets upset was when he dirtied his pants, now THAT made him unhappy much more than sitting on the little potty. I believe the time we spent doing elimination communication was a great bonding time!  You can actually find out so much more about it by watching the DVD Potty Whispering: The Gentle Art of Infant Potty Training

My potty trained newborn routine at 7 weeks of age went something like this:

He would wake up and go #1, then he would nurse, then he and daddy would go to the bathroom together and he would go #2… then he did what all babies do, play, sleep, cuddle and stare. He didn’t sit there and cry and I didn’t have to reward him with treats, charts, stickers, etc.  People say it takes more time to do it early, but I can tell you the truth because I have had 4 children do it ‘the normal way” (at age of 2-4), the truth is it is much less work the early way. You are already holding a newborn most of the time anyways! A toddler is up running and doesn’t want to sit still.

A toddler has the energy of 12 monkeys on Red Bull

With EC, I didn’t have to figure out when to start, I didn’t have to figure out how to talk him into it, bribe him, reward him, coerce him, buy diapers for 3 years, wipe big boy poopies off his bottom, deal with diaper rash, and so much more. As he began walking he  insisted on going to the big potty so we had to get him a seat like the Babyjorn Toilet Trainer, White/Black

and a BABYBJORN Safe Step, White

so that he could “do it on his own.” Another one we had was this which is actually available in blue or pink.

Reasons to consider EC with your infant:

If you do try this method, just remember to have patience with your infant. Never get angry for an “oops” and always praise, praise, praise for a “Yay” this is a gentle way of parenting. 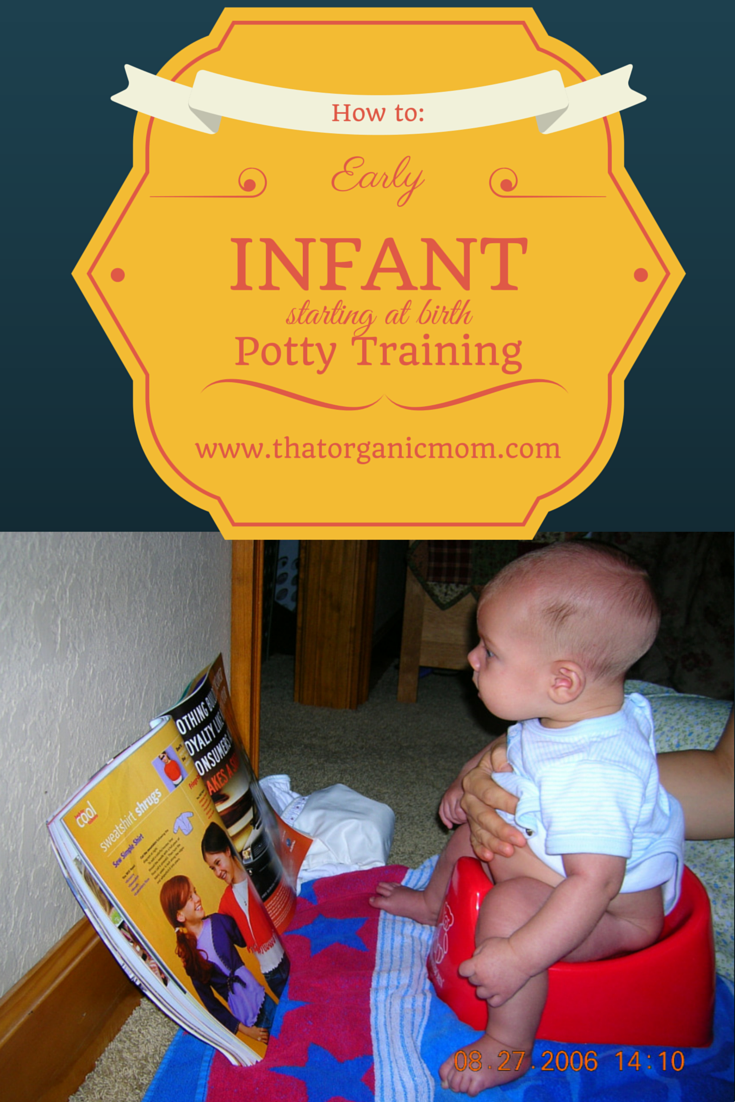 Have you read my 12 pound home birth story? What do you think of Elimination Communication? Share in the comments below and don’t forget to read one of my most popular posts about Creating Bedtime Routines!